What do you think about all the talk of conspiracy theories in the news? Are some of the words hard to understand? (Do some of the theories seem very unlikely, as well?)

I've linked to a few articles that can help you understand some of the conspiracy beliefs  most common in the English-speaking world (or at least the U.S.) Then there's an explanation of some related words that might be confusing. 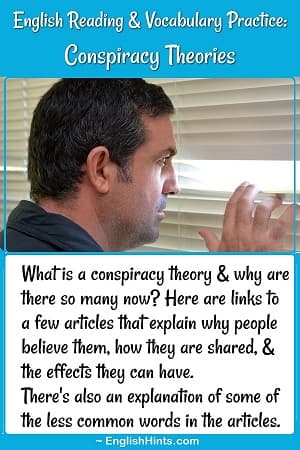 An article in LiveScience discusses 13 widely believed conspiracy theories. The article points out how difficult it is to change the minds of people who believe them, no matter what evidence is shown. As it argues, "hardcore believers are adept at rationalizing away evidence that contradicts their beliefs."

It briefly explains what conspiracy theorists believe about each of these claimed conspiracies:

The Guardian interviewed the young man who had started the campaign claiming that "Birds aren't real." It's quite a story! He started it as a reaction to the tension that had built up around Trump's inauguration in 2017. "I just thought: ‘I should write a sign that has nothing to do with what is going on.’ An absurdist statement..." He made up a quick story to go with his sign. He argued that the CIA had destroyed all real birds and replaced them with bird-like drones to spy on people.

Someone took a video of him there. It went viral. To his surprise, soon afterward he saw videos of kids chanting "Birds aren't real" at football games. They're a kind-of movement now. He says it's been clear to young people from the beginning that this is satire, not serious. (Some older folks who are "into" conspiracies have not been so sure.) He feels the viral response has been a way for his generation to process the craziness that seems to have taken over recently.

The Harm These Theories Can Do

This article from NPR is another reminder that conspiracy theories can have terrible real-world consequences. It tells the story of a family who lost their mother/wife to Covid-19 because she not only refused to be vaccinated, but refused effective treatments in the hospital because she believed they would kill her. (There's an audio version if you want to practice listening.)

Statistics show the "excess deaths" caused by vaccine refusal, but reading or hearing about an individual and the people who loved her makes the issue come to life. Her daughter said "I don't believe she was supposed to die...I blame the misinformation."

(These are all words from the LiveScience article that I thought might not be recognized.)

Birtherism: the claim that President Obama was actually born in Kenya, not Hawaii, and therefore had no legal right to be president

Conspiracy: a secret plan to do something wrong. Conspiracy theorists believe that certain events were actually caused by these hidden groups. They don't believe the official or usual explanation of what happened.

Fake: false; an imitation designed to look like something else

Debunk: to show that a theory or claim is false or not valid

Discredit: a more polite or academic version of 'debunk':to show that an idea is wrong

Disinformation: deliberate falsehoods designed to look true. (Misinformation is incorrect but it may not be intentionally false.The person who shares it may believe that it's true.)

Hoax: something presented as true that is not. Hoaxes may be jokes or may just be deception for profit.