Use this revision and proofreading checklist to make sure your writing as clear and effective as possible.  Make it easy for your readers to understand your thoughts! (Also see the link at the bottom for some extreme examples of why proofreading matters.) 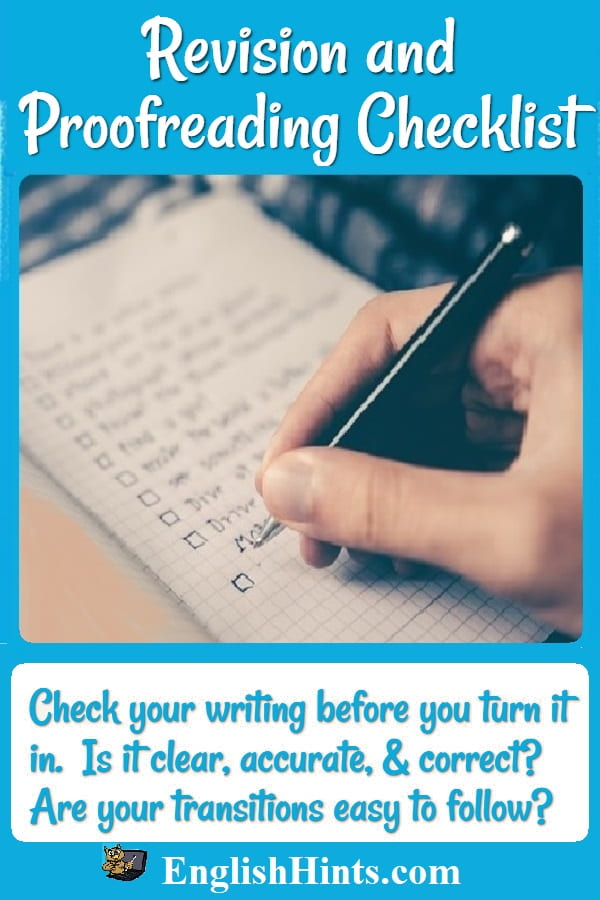 Read what you wrote out loud. (If possible, also have a friend read it.)

Listen and look for better ways to make your ideas clear. Ask yourself as you read each sentence and paragraph:

1. Have I considered my purpose in writing and the needs and background of the audience I’m writing for?

Will they understand my point? Will it persuade them, inform them, or entertain them? (In other words, did I succeed in what I planned to do?)

2. Did I completely answer the question or explain the idea I wanted to share?

3. Is what I wrote easy to understand, or could it confuse some readers?

4. Are the transitions between ideas and paragraphs clear? Can readers understand how each idea connects to the next and to the whole essay?

5. Does each paragraph have one main idea, and support the main idea of the whole essay?

6. Do I give enough examples and evidence to support each point I make?

7. Are there unnecessary words or phrases that I could take out to make it easier to read?

8. Is my use of verb tenses correct and consistent? (Changing tenses too often is confusing.)  Can the reader easily tell what happened in the past, what is happening now, and what hasn’t happened yet?

9. Is there a better way to say this? (Specific words are almost always better than general ones. Variety is better than constant repetition.)

For example, don’t repeat “said” whenever you mention that someone is talking. Instead, ask yourself HOW they spoke. “She mumbled,” “they urged,” “Bill asked,” “Sue answered,” “John warned,” and “Mary advised.”

Specific verbs also work better (when possible) than general verbs plus adverbs. Instead of “Anne spoke softly” you could write “Anne whispered.” Try “Bill joked" rather than “Bill said jokingly."  Instead of “he walked into the room” you can write “he raced,” “he hurried,” “he strolled,” “he stumbled,” etc. After revising your work, use this proofreading checklist to find mistakes.

Look for errors in spelling, capitalization, punctuation, and grammar. Ask yourself:

• Is my spelling correct? (Re-read carefully-- aloud-- besides using a spell check program. A program cannot recognize  wrong words like ‘to’ instead of ‘too’ or ‘there’ for ‘their.’)

• Did I start each sentence with a capital and end it with either a period (.), a question mark (?), or (if needed) an exclamation mark (!)?

• Is there a comma after each item in a list? Example: “apples, peaches, pears, and bananas.” (There is disagreement about the last comma, but I recommend it for clarity.)

• Did I connect independent clauses with either A) a comma + conjunction, OR B) a semicolon but no conjunction?

• Did I put a comma after a dependent clause that started a sentence? ("Even though I like peaches, I don’t like plums.")

• Did I connect independent clauses with either A) a comma and a conjunction (‘and’, ‘or’, or ‘but’) OR B) a semicolon but no conjunction?

• Did I put a comma after a dependent clause that started a sentence? (Even though I like peaches, I don’t like plums.)

• Does each sentence have at least one subject and one verb?

• Do the subject and the verb agree?

> Third-person singular subjects (he, she, etc.) need singular verbs. (Singular verbs end in ‘-s’ in the present tense.) “Bill is a teacher.” “He listens.”  “She washes her car on Saturdays." “Your child plays well with others.” “A pine tree grows fast.”

> Remember that the verb must agree with the subject, not with another noun. For example, “The branches of the tree are long.” The subject is ‘the branches.’ ’Of the tree’ just describes which branches. Nouns following a preposition are not the subject, even if they are next to the verb.

• Is every pronoun reference clear? (When I write ‘he,’ ‘she,’ or ‘they,’ will my readers be sure who I’m talking about? If I write ‘it,’ will the readers know what thing or idea I’m referring to?)

• Did I correct sentence fragments (incomplete thoughts, like a dependent clause by itself (“When he went to the store...” or “The girl, who was very pretty...”), or a subject without a verb (The boy and his friends...”)?

• Did I correct run-on sentences? (These are complete, unconnected thoughts that should have been separate sentences. Example: "The boy went to bed at 10 o'clock the pay ended.")

See the section below if you are not sure how to recognize complete sentences. (It can also help you with comma use for dependent clauses at the beginning of sentences.)

Examples: “the boy won the spelling contest,” or “his friends had a party for him.” Connect independent clauses with a comma + conjunction, OR 2) with a semicolon but no conjunction.

These are all correct compound sentences:

• “The boy won the spelling contest, and his friends had a party for him.”

• “The boy won the spelling contest, so his friends had a party for him.”

• “The boy won the spelling contest; his friends had a party for him.”

• “The boy won the spelling contest, but his friends did not have a party for him.”

This is an incorrect, run-on sentence: “The boy won the spelling contest, his friends had a party for him.”

• “when the boy won the spelling contest”

• “as soon as the boy won the spelling contest”

• “although the boy won the spelling contest”

• “When the boy won the spelling contest, his friends had a party for him.”

• “The boy’s friends had a party for him when he won the spelling contest.”(Notice that there is no comma because the independent clause is first.)

• “Although the boy won the spelling contest, his friends did not have a party for him.”

Here's a BBC article about how misplaced or omitted commas in contracts can cost millions of dollars (and once even cost a life.)